Celebrating the cultural, economic, social and political achievements of women, International Women’s Day, held annually on March 8, is an opportunity to reflect on the struggle for gender equality, reproductive rights and an end to gender-based violence. 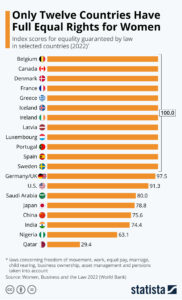 With its roots in the fight for women’s suffrage and female workers’ rights, the first International Women’s Day was observed on March 19, 1911, in commemoration of the revolution of 1848 and the Commune de Paris, with over a million women in Europe and the United States participating in marches and meetings, demanding the right to vote, to hold public office and to work and an end to discrimination on the job. More than a century later, IWD is celebrated around

the world but the struggle for equal rights continues. While the feminist movement has made huge strides for women to have the right to live free from violence and discrimination, enjoy the highest attainable standard of physical and mental health, be educated, own property, vote, and earn an equal wage, just 12 countries have legal gender parity. Women struggle daily to balance multiple roles at home and at work and do so in the face of ongoing discrimination. Women are still paid less than their male counterparts, and they are still underrepresented in government, senior management, STEM fields, and the news media. Meanwhile, gender-based verbal and physical violence and femicide are on the rise globally, child brides are still wed to grown men in several countries, and we are even seeing regression in fundamental rights, notably reproductive rights and access to abortion, in many US states. If we are serious about equal rights, we must go beyond merely legislating and look long and hard at our own role in this and at our willingness and commitment to turn equality laws into reality. As President of the Hellenic Republic Katerina Sakellaropoulou noted in her IWD speech to Parliament, “If Women’s Day is to be more than an excuse for celebrations and empty words, we must all, regardless of gender, rally to the struggles fought today across multiple fronts — fronts that remain open, whether in the fight for life or in the fight for equal rights.”