On Solid Foundations: Building on Educational and Cultural Diplomacy
By Business Partners | May-Jun 2020 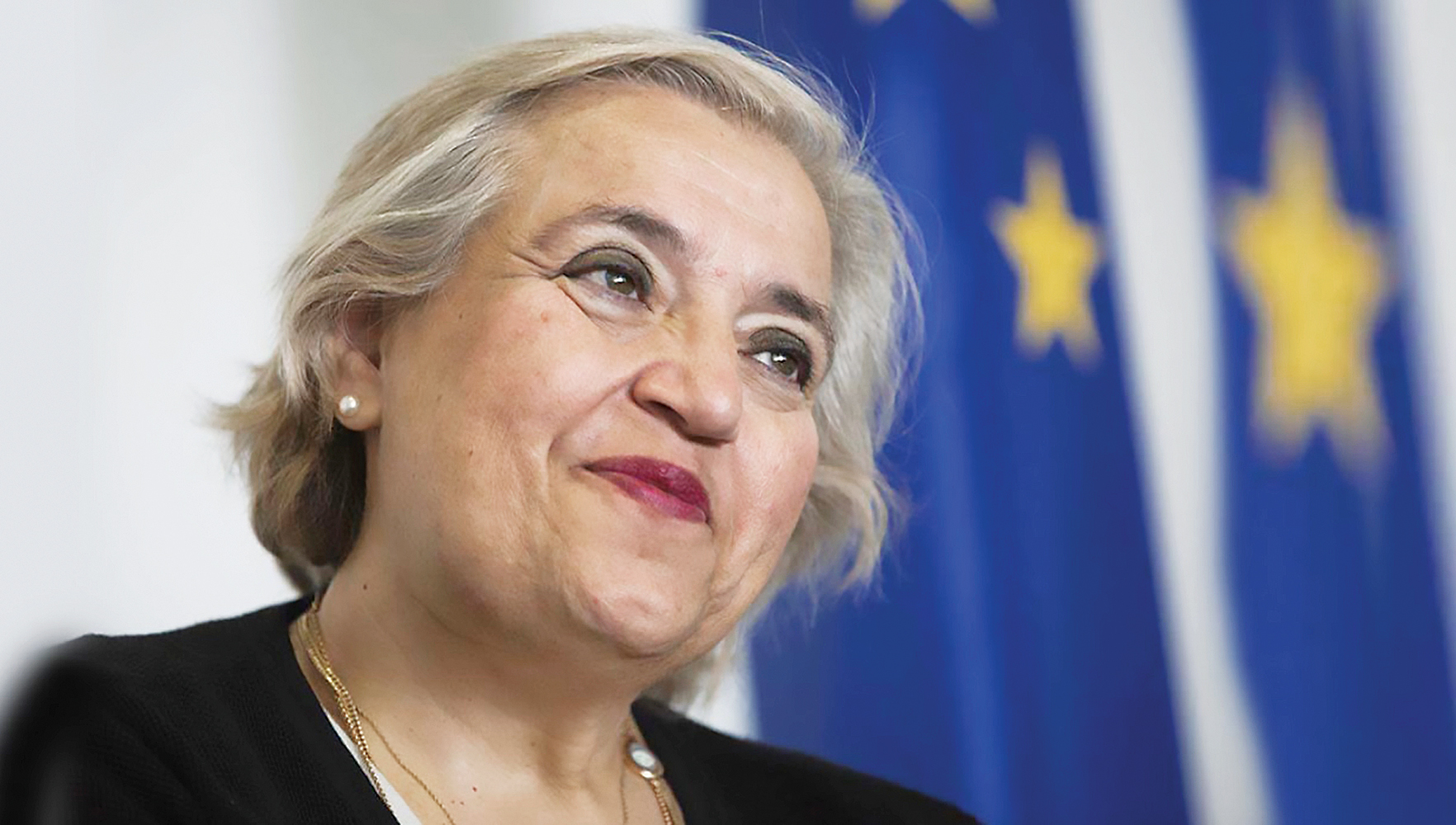 Distinguished member of the Greek Foreign Service. Fulbright Alumna. Trailblazer.
Alexandra Papadopoulou, Ambassador of Greece to the United States, talks to Business Partners about her experience with the Fulbright Program, the advances of women
in the Greek Foreign Service, her path to arguably the most prestigious appointment
in her field, and the role of education and culture at the center of diplomacy.

This interview is part of The Fulbright Alumni Corner series, an initiative of Business Partners and the Fulbright Foundation in Greece to showcase some of the extraordinary individuals who have been part of the Fulbright Program.

Tell us a bit about your early years. What inspired you to serve your country and pursue a career in the diplomatic service?

Joining the Foreign Service was a childhood dream. Somehow, I think I always knew the professional path I wanted to follow in life. From a very young age, I was fascinated by history and politics, travels and adventure, people, cultures and diversity; the diplomatic career was the obvious choice. In this respect, I consider myself a very lucky person, as I ended up doing what I always wanted to do.

How did you become a Fulbright Scholar? And what was your time with the Program like?

I finished law school at the University of Athens and, like a lot of my fellow students, I wanted to further pursue my studies. Doing so in the U.S. was a real dream because it combined an outstanding academic experience with exposure to a different educational system and way of life. The Fulbright Program made this possible for me and I share in the gratitude of all alumni for having been given such a unique opportunity—especially at a time when this kind of foreign exploits was not as common or easy as today.

In their 200+ year history as modern states, Greece and the United States always fought side by side, never in opposite camps

The people at the Program, both in Greece and the United States, were indeed magnificent in guiding me throughout the process but also in easing me into the American way of doing things. I have strong feelings of gratitude for their professionalism, kindness, patience and commitment—and the remarkable way they performed.

Are there any particularly memorable moments that really defined that experience?

First and foremost, I attended one of the finest universities in the United States, the University of Pennsylvania, in Philadelphia, the city of brotherly love. As I said, being exposed to the American educational system was an invaluable experience. But I was also exposed to the U.S. as a country, to its people, to their mentality, to the system, the admirable and the not-so-admirable points. As a young person at the time, I was very receptive to ideas, changes and challenges. I took the opportunity to also travel a lot in the country. The time I spent in the U.S. defined a great deal my way of thinking, my understanding of the U.S., and my abiding love for all things American. It was a life-changing experience.

You recently made history by becoming Greece’s first female ambassador to the United States. This achievement will undoubtedly open new doors for women in the Greek foreign service. What is your message to the young women striving to achieve such professional distinction in Greece and, of course, to the women who came before you and helped pave the way?

Women were first admitted to the Greek Foreign Service only in the mid-70s—and, even then, in limited numbers. We owe a great deal of respect and admiration to the first two Greek women diplomats, the pioneers of our profession, Maria Zografou and Maria Papaefstathiou. With their professional skills, their knowledge and their dignity, they paved the way for all of us and set an example.

In my 38 years of professional life, I witnessed a great deal of change; I have to acknowledge that things did eventually work in the right direction. Today, female colleagues are close to almost 35-40% of the total number of Greek diplomats—and going strong. There is also a good number of female Greek ambassadors, including in capitals like Moscow or Paris, as well as the Greek permanent representative to the UN in New York. Some five years ago, I was the first female permanent representative of Greece to the EU in Brussels. As the younger generation, which counts more women in its ranks, gets promoted, more and more female colleagues are appointed to positions of influence. And this is most important, since, as you very well know, achieving gender equality means going beyond numbers; more importantly, it means breaking the glass ceiling and reaching the top.

While faced with an array of obvious challenges, being a member of the diplomatic service also offers many rewards. Like in every profession, the key to success is loving what you do. And this has no gender prefix. I can only wish my younger colleagues to find in their job the excitement and satisfaction I did—and still do.

You presented your credentials to President Trump in February, mere weeks before the outbreak of an unprecedented global crisis. How has the novel coronavirus pandemic affected the Greek community in the United States and the relationship between the two countries?

Greek-American relations are at their highest point in recent memory. We should not forget that the two countries share the same values and principles; in their 200+ year history as modern states, they always fought side by side, never in opposite camps; they cooperate closely, they exchange views and opinions on a regular basis; they belong to the same alliance and strive for the same goals of peace, security, human rights and democracy, stability and progress, for their peoples, their regions and the world. The numerous and extremely vibrant and highly successful Greek-American community serves as a strong reminder of these unbreakable ties, as well as the bridge facilitating mutual understanding and commonality of purpose.

The coronavirus pandemic has been a challenge to all of us, to all countries and peoples. For the first time, we were faced with a ruthless enemy posing a severe collective threat and upsetting our ways of living. But I hold huge trust to science and I believe that soon this will be a thing of the past.

I am very proud to say that Greece has been extremely successful in dealing with this challenge. Our top priority has been to preserve human life, while striving to minimize the effects of the pandemic to our economy. Our success has been acknowledged by the whole world; I am not bringing any news to you. Especially after 10 hard years of severe economic crisis, this is a source of extreme pride and renewed self-confidence of the Greek nation, living at home or abroad. The Greek-American community, always being very close to the motherland, is feeling this success and shares in the pride of the accomplishment.

All of us in Greece look forward to the day-after and invite all Americans to visit Greece, to invest in Greece, to trust Greece, to bet on Greece. The role of the Greek-Americans in this regard is invaluable.

What are your thoughts on the role of educational and cultural diplomacy, especially in trying times such as these? From smaller initiatives such as the newsletter published by the Greek Embassy in DC to global international exchange programs such as Fulbright, how do you think that this kind of soft diplomacy can strengthen ties between countries and contribute to global peace and stability?

Is education and culture the cornerstone of international understanding and cooperation? My answer is a sound YES. Thus, they are at the center of diplomacy, as the main components of soft power. As far as Greek-American relations are concerned, their first and most important component is commonality of values, as I said before. How do you communicate these values? How do you make them part of the mindset of the younger generations in both countries, so that they learn to appreciate the bonds of friendship that abide us? Culture and education is the answer for abiding and long-lasting friendship and understanding. The Fulbright Program served—and continues to serve—a noble cause; in this vein, it deserves our strong support and deep gratitude.

Forging Ahead for Health
By Business Partners | Jul-Aug 2021
August 1, 2021
Posts on this section
Go to Top