Did We Learn Our Lesson?
By Alexandra Loli, PhD, Publisher | Business Partners, Nov-Dec 2019

This November marked the 30th anniversary of the fall of the Berlin Wall. Originally constructed in 1961, the 12-foot-high and more than 100-mile-long concrete wall stood tall for some 28 years to divide the communist East from the capitalist West. More of a symbol than an actual barrier for most of its course in history, the Berlin Wall reminded the world of one of its darkest times, the lack of freedom, the Cold War.

Following a period of mounting civil unrest, on November 9, 1989, the East German government finally allowed its citizens to visit West Germany and West Berlin. That was the beginning of the end for the Berlin Wall, as crowds of East German citizens climbed the Wall, destroying it in effect piece by piece, in order to cross the border and join West Germans on the other side in a uniquely celebratory atmosphere. The actual demolition of the Wall officially began on June 13, 1990, and was completed in November 1991. The fall of the Berlin Wall paved the way for German reunification and thus ushered in a new era for Germany, bringing hope and turning the political page for the entire world. Art, music and literature of the time indeed paint a picture of a world coming together.

Today, the memory of the wall and all it stood for still inspires us. But, have we actually evolved as a society? Not really, one would argue, as authoritarianism, antidemocratic policies and extremist thinking seem to be at an all-time high. In the last decade, we have somehow managed to grow more intolerant towards women, immigrants, and minorities in general. The abundance of information we now have access to through the world wide web and the various social media platforms has, surprisingly, not brought us closer together. Alas, we have created a powerful weapon and placed it in the hands of those who advocate for hate speech, racism, and restriction of self-expression. 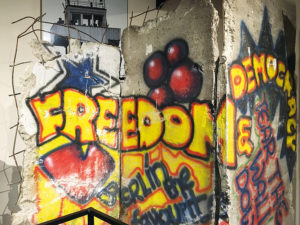 If history can teach us anything at all, it is that putting up walls and condoning polarization in effect results in imprisonment for both sides. Many of us today enjoy freedoms that seemed impossible just a few generations back. If we keep undermining this privilege, one thing is certain; we are destined to repeat the mistakes of the past. We need to tend to our democracy, constantly nourish tolerance and yet stand firm against those voices of bigotry and authoritarianism that seek to destabilize all we have achieved.