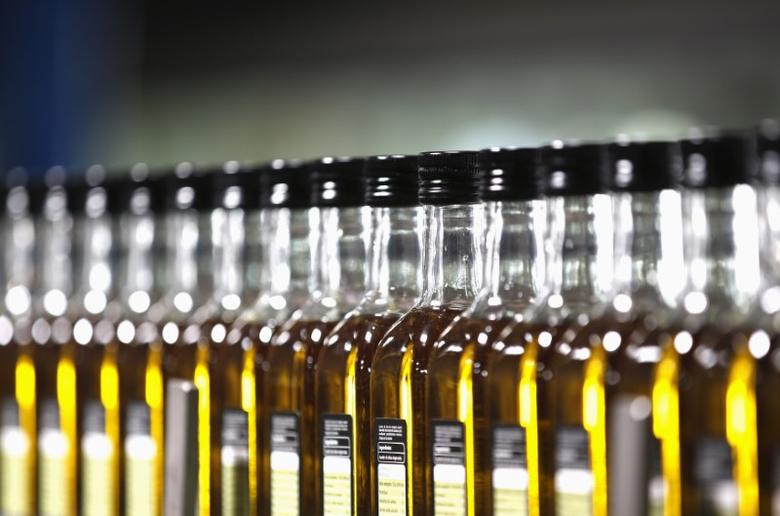 Bottles of olive oil are lined in a factory in Dos Hermanas, near the Andalusian capital of Seville September 21, 2012. REUTERS/Marcelo del Pozo

(Reuters Health) – A traditional Mediterranean diet with added olive oil may be tied to a lower risk of heart disease at least in part because it helps maintain healthy blood flow and clear debris from arteries, a Spanish study suggests.“A Mediterranean diet rich in virgin olive oil improves the function of high-density lipoproteins, HDL, popularly known as `good’ cholesterol,” said lead study author Dr. Alvaro Hernáez of the Hospital del Mar Medical Research Institute in Barcelona.
This type of diet typically includes lots of fruits and legumes that are rich in antioxidants as well as plenty of vegetables, whole grains and olive oil. It also tends to favor lean sources of protein like chicken or fish over red meat, which contains more saturated fat.“Our hypothesis is that these dietary antioxidants may bind to HDL particles and protect them against different kinds of attacks,” Hernáez said by email. “As HDLs are more protected, they can perform their biological functions more efficiently and, therefore, they are able to remove cholesterol from arteries or contribute to the relaxation of blood vessels for longer.”
High levels of low density lipoproteins (LDL) or “bad” cholesterol and fats known as triglycerides are associated with an increased risk of heart and blood vessel diseases. HDL, or “good,” cholesterol is associated with a lower risk because it helps remove excess LDL from the bloodstream.
For the current study, Hernáez and colleagues examined data on 296 older adults at risk for cardiovascular disease who were randomly assigned to one of three diets: a Mediterranean diet supplemented with one liter per week (about 34 fluid ounces) of extra virgin olive oil, a Mediterranean diet supplemented with 30 grams (1 oz) of nuts a day, or a low-fat diet.
Participants were 66 years old on average, and they were asked to follow their assigned diet for one year. Only the low-fat diet was associated with reduced LDL and total cholesterol levels, researchers report in a paper scheduled for publication in the journal Circulation.None of the diets increased HDL levels significantly.But blood tests and lab work showed better HDL functioning in the group assigned to the Mediterranean diet with extra olive oil.
While some previous research has linked a Mediterranean diet to weight loss and a reduced risk of heart disease and some cancers, scientists haven’t conclusively proven that the diet itself is responsible, instead of other lifestyle choices made by people who eat this way.
Limitations of the current study include the fact that all three diets were relatively healthy, making it difficult to detect meaningful differences in outcomes, the authors note.Still, the findings add to a growing body of research suggesting that HDL function may influence cardiovascular disease risk, Dr. Daniel Rader of the University of Pennsylvania in Philadelphia writes in an accompanying editorial.
“We know the Mediterranean diet reduces risk of heart disease but still don’t know exactly why,” Rader said by email. “There is probably more than one reason, and this study suggests that one mechanism might be that the Mediterranean diet improves the function of HDL.”Even without clear evidence explaining why the Mediterranean diet may help the heart, eating this way can still make sense, Rader added.“For people who are interested in reducing their risk of heart disease, the Mediterranean diet is probably the best proven diet to reduce risk,” Rader said. “I think the majority of people who don’t have other major dietary concerns should look toward the Mediterranean diet as a heart healthy diet.”