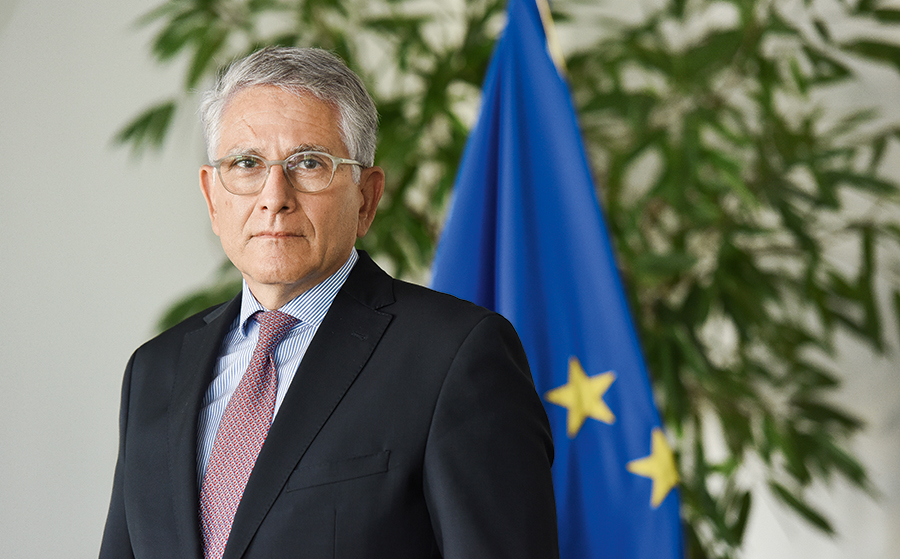 In July this year, Gerassimos Thomas stepped down from his position as Deputy Minister for Environment and Energy of the Hellenic Republic to take up his role as the new Director General of the European Commission’s Directorate General for Taxation and Customs Union (DG TAXUD). T.C. Lowrie reached out to him to talk about the challenges ahead, efforts to reform taxation in the EU, and his hopes for a sustainable future.

You’ve stepped into your new role as Director General of TAXUD as the transition period for the UK’s withdrawal from the European Union comes to an end. How can stakeholders across Europe expect to be impacted?

The end of the transition period will have major consequences, particularly for European businesses trading with the UK. Businesses need to be ready for inevitable changes in tax and customs procedures and additional formalities to account for. We strongly encourage traders to inform themselves on the steps they need to take before the end of the year. Talk to your national authorities, and get ready ahead of time. Also know that we are doing the same. EU Member States have employed and trained thousands of new staff and invested in smart solutions so that border procedures can run as smoothly as possible after January 1.

Within the Union, disagreements between Member States (MS) are holding up the switch to a streamlined destination-based VAT regime for B2B goods cross-border transactions that could significantly improve transactional transparency and reduce VAT fraud, which is tens of billions each year for B2B cross-border sales. Do you believe that the transition to a new system can soon be agreed upon unanimously?

In 2018, the Commission proposed a major overhaul of the current VAT rules. Under the reform, VAT would be charged on cross-border sales between businesses, which could decrease VAT fraud by 80%. MS are still discussing this proposal. Of course, I would absolutely favor an agreement on this as quickly as possible.

In the meantime, several measures have already been put in place. MS have agreed on new VAT rules for EU companies trading in goods and services online. This alone should increase VAT revenue from online sales by €7 billion a year.

In July, the Commission also published an ambitious new Tax Package, to further reinforce the fight against tax abuse and help tax administrations keep pace with a constantly-evolving economy. The Commission is working to introduce a common, standardized, EU-wide system for withholding tax relief at source, accompanied by an exchange of information and cooperation mechanism among tax administrations.

MS are working on using new technologies to improve cooperation and information sharing in order to combat fraud and tax evasion. How is Greece faring on this front? What kind of technical and political cooperation is required to allow the country to achieve the desired results, both internally and as part of the European family?

The problems Greece is facing are the same problems the EU is confronting as a whole. The rapid rise of e-commerce means that tax evasion is becoming increasingly difficult to spot. To keep up, we need to step up! That means giving national tax authorities the right tools to work effectively, cooperate and exchange information. We are already working on that. In July, we published an initiative to extend EU tax transparency rules to digital platforms. MS will automatically exchange information on income generated by sellers on digital platforms and identify situations where tax should be paid.

These measures are part of a broader strategy for creating an EU tax environment fit for the digital age. Tax administrations in the 21st century have to be digital and data driven. This will help both cut compliance costs for businesses and MS and step up the fight against tax abuse. The Recovery and Resilience Facility (RRF), part of the EU’s major recovery plan, can help finance the transition to digital tax administrations in the EU. Moreover, we need to make sure that our tax systems are adapted to the new ways value is generated in the digital economy. Digital giants benefit enormously from our Single Market, even more so during the pandemic, so it only makes sense that they would also contribute to the recovery. The Commission is preparing a proposal for a digital levy to help finance the digital transition via the Recovery and Resilience Plans (RRPs)—at least 20% of their expenditure will be related to digital.

Discussions on digital taxation are currently ongoing in the G20 and the OECD. The EU is supporting this process and favors a global approach in this area. But should there be no global agreement, the EU will come forward with its own proposal for the fair taxation of the digital economy. No company should escape taxation by playing with international tax loopholes, but equally, no company should pay more than what they rightfully owe.

We are also working to ease compliance for honest businesses. New rules governing VAT for distance sales should reduce the administrative burden for online businesses by up to 95%, saving them more than €2 billion per year. Greece is one of the countries that is prepared from a technical point of view to make the required IT changes in its tax and customs systems and put these rules in place.

While cross-border taxation, Brexit, and Covid-19 dominate headlines, other key issues such as climate change also remain to be dealt with. What are your thoughts on Europe’s ability to push forward with effective energy and climate policy whilst also fostering speedy economic recovery from the current crisis?

Fighting climate change and supporting recovery can go hand-in-hand. The EU has committed to harnessing the potential of green growth to help Europe bounce back. You can already see this commitment translate into policy and action. From new funding instruments for MS, such as the Next Generation EU Fund of which €72 billion will go to Greece, to new ways of financing the EU budget itself, Europe has put climate at the top of its agenda; 37% of each Recovery and Resilience Plan has to be related to climate.

Environmental taxes, for example, can deliver on many fronts. They are growth-friendly, as they encourage investment in clean, innovative processes, which boost competitiveness. They also encourage more sustainable behavior and can help offset the costs of the environmental transition.

We have therefore started the process of revising EU rules on energy taxation and removing the implicit subsidies for fossil fuels. We are also developing a carbon border adjustment mechanism (CBAM), putting a carbon price on imports to address the risk of carbon leakage. The CBAM proposal is developed together with a reformed and possibly extended Emissions Trading Scheme. While the CBAM is mainly a climate-policy instrument, it can also raise revenue to directly contribute to the recovery. These three proposals will be part of the “Fit for 55” package, concrete measures to support our commitment to increasing the 2030 target for emissions reductions to at least 55%.