Digital Banking and the Limits of Technology
By Dr. Panagiotis Avramidis, Associate Professor of Finance and Quantitative Methods at Alba Graduate Business School, The American College of Greece, and fellow of the ACG Institute for Hellenic Growth and Prosperity | Business Partners, Jan-Feb 2022

Technological developments and the transition to the digital economy have signaled a new era for the banking industry, leaving banks with no other option but to upgrade their systems and processes. 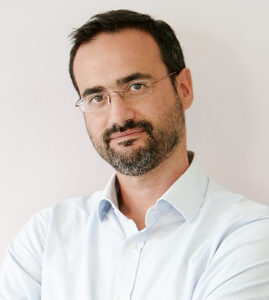 In the past, similar technological improvements, such as adopting automated models of risk measurement and management, benefited banks — by way of reducing their operating expenses and bad debt provisions — and borrowers alike, by lowering financing costs. To be sure, there is still ample room for banks to improve their performance further by means of digitalizing a significant part of their operations. Nevertheless, those who believe that future banking transactions will take place only online through mobile apps and without any human intervention — thus heralding the end of the brick-and-mortar bank branches — will have to think again. Such predictions disregard the benefits from the interaction between banks’ loan officers and borrowers, which cannot be emulated by the current technology.

One of the main bank functions is to collect and process information about borrowers’ creditworthiness. On the one hand, the information may be readily verifiable and transferable, such as, for instance, financial statements, business plans and available cash. On the other hand, there is the non-verifiable and non-transferable information, also known as soft information, such as the entrepreneur’s personality type, the particularities of a small local market, which is collected through the banking relationship, i.e. the interaction between the loan officer and the entrepreneur. Although large businesses in their majority rely on readily verifiable and transferable information for their creditworthiness, small to medium-sized businesses depend primarily on their relationship with the bank which enables them to pass on the soft information.

The benefits from this relationship, according to research findings, include lower rates, more favorable loan collateral terms, even extra cash flow support in the event of a financial crisis. Moreover, recent research has found that businesses whose banking relationship was disrupted because of their bank being absorbed by another bank, were more likely to rescind their liability payments.1

Specifically, the study focused on tourism and hospitality businesses in the course of the Greek debt crisis that triggered a large number of bank mergers. As revenues from abroad were not significantly impacted — or in some cases even increased — the study found that a percentage of the businesses were affected by the merger-induced disruption of their relationship with the bank to such an extent that they chose to stop paying their debts to the “new” bank. This phenomenon is even more frequent in cases where bank absorptions coincided with extensive branches closing down and high turnover of the loan officers.

On a closing note, technological upgrade is imperative so long as banks wish to compete with new tech-savvy financing companies aka fintech companies. Nevertheless, the limits of current technology also set a limit to how far this adjustment can go. Perhaps someday, in the future, machines will be able to interact with people and collect information even about personality or soft skills. Until then, bank branch employees will continue to be an important source of information, establishing relations of trust with the local business community.

Strategy Amid Crisis: How to Build Strategic Agility for Your Business
By Dr. Kyriakos Kyriakopoulos, Professor of Strategy and Marketing, Academic Director of the Executive MBA, Alba Graduate Business School, The American College of Greece | Business Partners May-Jun 2022
June 24, 2022

Digital Transformation May Not Be What You Think!
By Nikos Mylonopoulos, Associate Professor of Digital Business and Director of the SEV Center of Excellence in Creative Leadership, Alba Graduate Business School, The American College of Greece | Business Partners Mar-Apr 2022
April 29, 2022