Fulbright: The Man. The Program. The Legacy.
By Business Partners, Jul-Aug 2019

J. William Fulbright was one of the most renowned U.S. statesmen of the 20th century. His vision for peace and mutual understanding not only shaped his political career and contribution to international affairs but also transformed the lives of generations of young people around the world, by promoting international understanding and respect between nations through education. 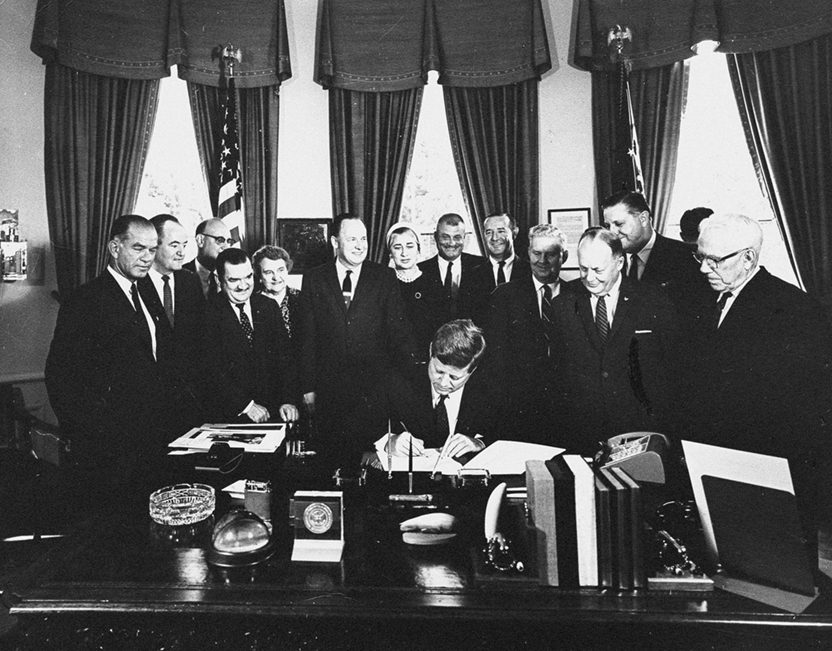 President Kennedy signing the Fulbright-Hays Act, September 21, 1961, in the presence of members of the House and Senate, including the cosponsors of the legislation, Senator J. William Fulbright (far left) and Congressman Wayne L. Hays (sixth from left). University of Arkansas Libraries Archives

When President John F. Kennedy signed the Mutual Education and Cultural Exchange Act on September 21, 1961, he remarked on the magnitude of the occasion. “This ceremony has historic significance because it marks full recognition by the Congress of the importance of a more comprehensive program of education and cultural activities as a component of our foreign relations,” he said. The Act built on previous legislation that had been introduced 16 years earlier by visionary freshman U.S. Senator J. William Fulbright of Arkansas: the Fulbright Act, signed into law by President Harry S. Truman in 1946, which initiated and financed international educational exchange programs using funds derived chiefly from the sale of U.S. surplus property abroad in the wake of World War II. Drawing on his own experience as a Rhodes Scholar at Oxford, Senator Fulbright had envisioned a way to improve intercultural relations and build strong and lasting ties between the people of the United States and the people of other countries around the world.

“The Program,” said Senator Fulbright, “aims to bring a little more knowledge, a little more reason, and a little more compassion into world affairs and thereby increase the chance that nations will learn at last to live in peace and friendship.” Indeed, since its inception in 1946, and with the broadened scope afforded it by the Mutual Education and Cultural Exchange Act of 1961, the Fulbright Program went on to become the largest, and arguably most successful, educational exchange program in history.

In its first year, in 1948, the Program brought 35 students and a single professor to the United States and sent 65 Americans abroad. In the years since, there have been more than 380,000 Fulbrighters from the United States and other countries. Today, the Fulbright Program awards approximately 8,000 grants annually and operates in over 160 countries worldwide. Its role as a key element of the United States’ bilateral relationships with countries around the world is indisputable. 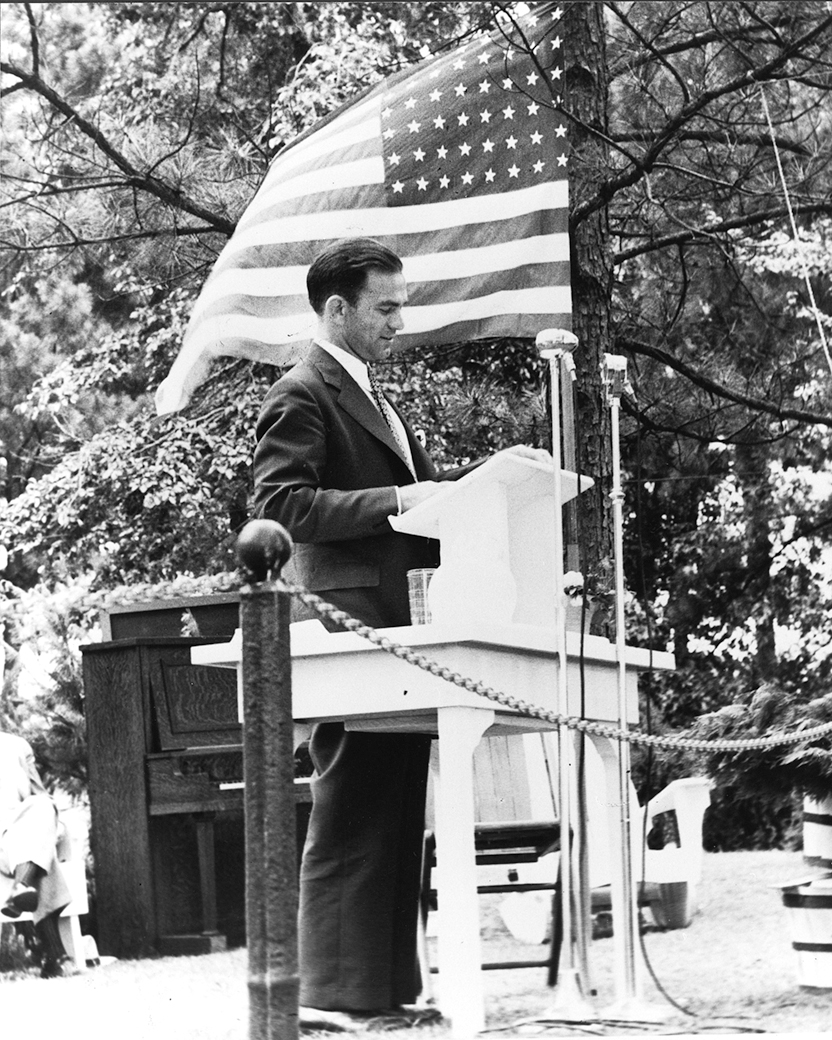 James William Fulbright was born on April 9, 1905, in Sumner, Missouri. He was educated at the University of Arkansas where he was awarded a B.A. in Political Science in 1925. He attended Oxford University as a Rhodes Scholar, receiving his M.A. degree in 1928, and returned to the United States to study law at The George Washington University Law School, receiving his degree in 1934. Prior to entering politics, he worked as an attorney in the Antitrust Division of the U.S. Department of Justice and as lecturer in law at the University of Arkansas, where he was appointed president of the school in 1939, becoming the youngest university president in the country.

Fulbright was elected to the United States House of Representatives in 1942, entering Congress in January 1943. He came to national attention during this period when, as member of the House Foreign Affairs Committee, he proposed a resolution—adopted by the House as the Fulbright Resolution—supporting international peacekeeping initiatives and encouraging participation in what was to become the United Nations. The following year he was elected to the U.S. Senate and served there from 1945 through 1974. He became a member of the Senate Foreign Relations Committee in 1949 and served as its chairman from 1959 to 1974, becoming the longest-serving chairman of the committee in history.

Throughout his career, Fulbright remained steadfast in his dedication to promoting peace, education and international cultural understanding. “Education is a slow-moving but powerful force,” he said, and on many occasions, he underlined its crucial role in fostering international peace and stability. “Education is the best means—probably the only means—by which nations can cultivate a degree of objectivity about each other’s behavior and intentions.”

Senator J. William Fulbright died on February 9, 1995, in Washington D.C. His commitment to peace and to international mutual understanding lives on in his legacy, in the hundreds of thousands of young people who are afforded the opportunity to study abroad, who are transformed by their international experience, and who go on to promote tolerance and understanding, in the Fulbright Program and its alumni. 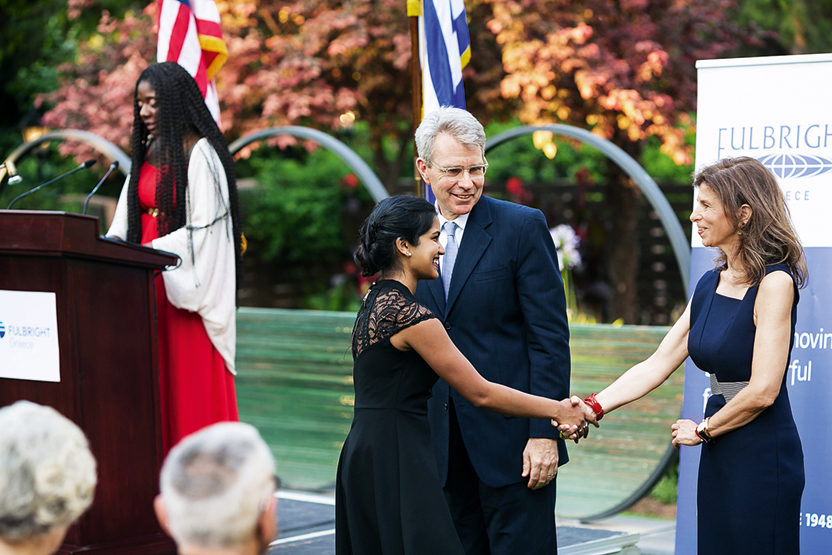 Greece was one of the first countries to enter into an agreement with the U.S. government for participation in the Fulbright Program. The Fulbright Foundation in Greece was established in 1948, with Alison Frantz—the renowned archaeologist, photographer, member of the American School of Classical Studies at Athens (ASCSA), and Cultural Attaché of the U.S. Embassy in Athens from 1946 to 1949—serving as its first unofficial Executive Director.

One of the great assets we have on this earth is the diversity of our people and the richness of their cultures. Each of these cultures represents a unique historical development, a compilation of experiences from which all the rest of us can profitably learn.

Senator Fulbright showed his support for the Foundation in Greece through a number of visits to the country: in the critical early days of the Foundation’s establishment, on major anniversaries, and to accept the prestigious Athinai – Man and Mankind Prize from the Alexander S. Onassis Public Benefit Foundation for his work in founding the foremost educational exchange program in the world. “International exchange was intended to undo this concept of the barbarian, and modern transportation, communication, and the internationalization of business have combined to make all of us more or less familiar with most peoples of the earth. But familiarity is not enough,” Senator Fulbright emphasized during his acceptance speech at the Onassis Foundation awards. “One of the great assets we have on this earth is the diversity of our people and the richness of their cultures. Each of these cultures represents a unique historical development, a compilation of experiences from which all the rest of us can profitably learn.”

Since its establishment in 1948, more than 5,500 individuals have received scholarships from the Fulbright Foundation in Greece to participate in U.S.-Greece educational and cultural exchanges. Today, the Fulbright Foundation in Greece continues its 71-year tradition of excellence, working to broaden and strengthen mutual understanding between Greece and the United States by offering educational and cultural exchange opportunities to Greek and American citizens.

The Foundation wishes to acknowledge the numerous individuals who offer their support through pro bono services, as well as those who supported the Fulbright Alumni Arts Series: Art Supports Education grassroots fundraising initiative.