With an Eye to the Future: AmChamGR’s Key Contributions to TIF 2021
By Business Partners | Sept-Oct 2021 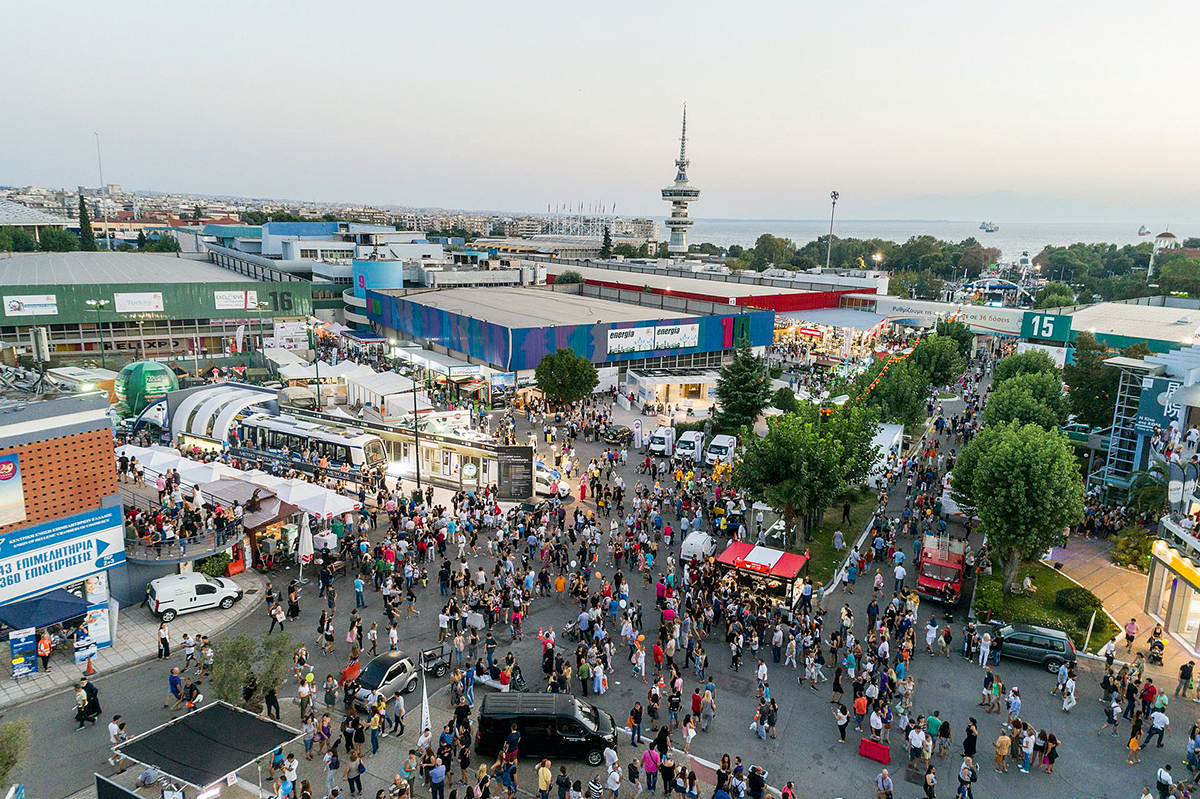 Upholding the legacy of its hugely successful U.S. Pavilion at TIF 2018, the American-Hellenic Chamber of Commerce once again returned to Thessaloniki International Fair with a strong presence. Through a series of events and participations, AmChamGR shone a spotlight on Greece’s ever-growing potential as a major regional and international player in energy, technology, commerce and innovation and highlighting key role of major Greek and U.S. companies in forging the way forward to Greece’s future.

Greece’s 85th Thessaloniki International Fair was held from September 11 to September 19, 2021, at the Thessaloniki International Exhibition Center. Despite limitations brought on by the ongoing Covid-19 pandemic, TIF 2021 was a resounding success and sent a clear message to visitors as well as the world: The Greek economy is restarting. With a slew of health and safety measures and precautions to ensure a safe and Covid-free environment for all guests and participants, the Fair opened its doors to the public featuring an impressive program that included more than 900 exhibitors from 15 countries as well as a wealth of thematic events.

Paying homage to Greece’s bicentennial, celebrating 200 years since the beginning of the Greek War of Independence, this year’s theme focused on the country’s heritage and prospects under the titled: “Greece: Past – Present – Future.” During the course of the week, special events and features showcased a range of key topics of interest including the historical evolution of Greece’s 13 regions alongside their traditional strengths and current productive capacity, the country’s startup landscape and developments in entrepreneurship, its road ahead into the digital future, and green growth and sustainability initiatives.

Remembering Greece’s past and the numerous and significant challenges it triumphantly overcame, and looking to the future and the new challenges and opportunities ahead, it is clear that today Greece is once again going through a watershed moment. The choices we now make, and the planning and effort we put into realizing our decisions as effectively and efficiently as possible, will set the foundations that will determine Greece’s path and role in the years to come. In the context of this crucial effort, the American-Hellenic Chamber of Commerce once again participated in Thessaloniki International Fair, organizing and participating in a series of panel discussions and events that brought together key stakeholders, policymakers and opinion leaders to discuss, examine, and showcase opportunities that will foster growth — nationally, regionally and internationally — and bolster the strong ties between Greece and the United States, its longstanding ally across the Atlantic.

The American-Hellenic Chamber of Commerce kicked off its TIF 2021 program with a working breakfast with Deputy Minister of Interior Stelios Petsas. Attended by AmChamGR members and members of the AmChamGR board of directors, the meeting focused on investments, recycling, innovation and digital transformation, with an emphasis on how local government can serve as a key driver of sustainable development, promoting environmental protection and contributing to an improved quality of life for citizens. 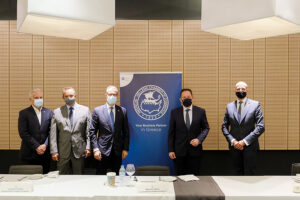 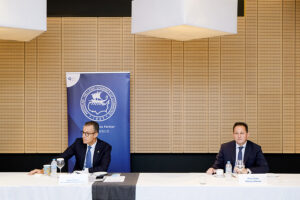 For the fifth year running, the American-Hellenic Chamber of Commerce convened its annual Southeast Europe Energy Forum (SEEF). Organized by AmChamGR in partnership with the Hellenic Association for Energy Economics, in cooperation with the United States Embassy in Greece, and with the Atlantic Council and the United States Chamber of Commerce as strategic partners, SEEF 2021 took place on September 10, at the MET Hotel in Thessaloniki.

Geoffrey R. Pyatt, Ambassador of the United States of America to the Hellenic Republic

Featuring a full-day program of panel discussions and speeches, the Forum focused on Greece’s role as a key regional player, investment opportunities in Greece’s energy sector, and plans and initiatives for the development and optimal utilization of green energy. The event also focused on new partnerships and collaborations throughout the region and beyond, the development of green innovation, developments in materials and processes in the energy field, smart energy management tools, the impact and challenges of climate change, sustainable development and the energy sector, as well as tools and infrastructure that can facilitate a response to climate change and ecosystem preservation.

The Greece-North Macedonia gas interconnector will further upgrade the geopolitical role of Greece, which is steadily emerging as an energy crossroads and natural gas hub in southeast Europe.

Thanks to the American-Hellenic Chamber of Commerce’s close ties with the United States government and business ecosystem, and thanks to the participation of prominent business leaders, key policymakers, and top academics from Greece and across Europe, SEEF 2021 featured a series of insightful, meaningful and productive discussions that will doubtlessly contribute to shaping the roadmap for Greece, and the region, as it moves forward into its future. For their part, the United States Ambassadors to Greece, Albania, Bulgaria, North Macedonia, and Serbia underlined the significance to the US of Southeast Europe’s energy sector, highlighting future investment opportunities and developments in the region.

The improvement of infrastructure in the region and in the energy sector is a prerequisite for the deepening of economic cooperation between the countries; this process has longterm results, creates new supply chains, new jobs, improvement of social prosperity.

Andrey Zhivkov – Minister of Energy, the Republic of Bulgaria

In the context of the 5th annual Southeast Europe Energy Forum, and true to the spirit of the event, Greece’s Hellenic Gas Transmission System Operator (DESFA) and North Macedonia’s Joint Stock Company for performing energy activities National Energy Resources Skopje in state ownership (NER JSC Skopje) also signed a Cooperation Agreement for the development and construction of the Greece-North Macedonia Gas Interconnector. The agreement, which established the cooperation principles, respective commitments and key milestones for the project’s development, was signed by Maria Rita Galli, CEO of DESFA, and Bajram Rexhepi, Executive Director of NER JSC Skopje, in the presence of Greek Minister of Environment and Energy Kostas Skrekas, General Secretary for Energy and Mineral Resources Alexandra Sdoukou, and United States Ambassador to Greece Geoffrey R. Pyatt.

The role of Greece and its investment potential have been upgraded, giving the country’s economy a significant boost. Greece is called upon to face new challenges and use its geopolitical advantage to regain steady growth.

Anthony F. Godfrey – Ambassador of the United States of America to the Republic of Serbia

Nektaria Karakatsani – Advisor to the Minister of Environment and Energy; expert in energy regulation and EU funding

Kyriaki Kosmidou – Professor in Banking Finance and Head of the School of Economics, Aristotle University of Thessaloniki (AUTH); Vice President of the Hellenic Association for Energy Economics (HAEE)

Geoffrey R. Pyatt – Ambassador of the United States of America to the Hellenic Republic 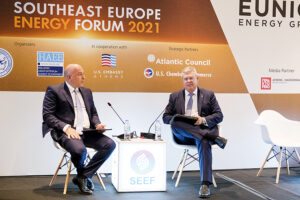 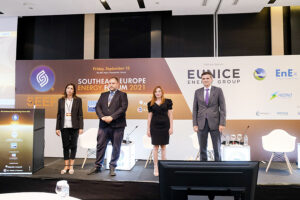 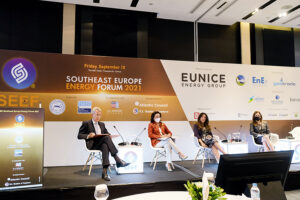 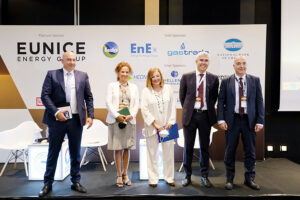 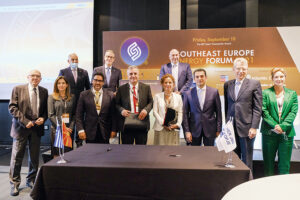 Snapshot from the signature ceremony of the agreement between Desfa-Ner with the presence of Μr. Kostas Skrekas, Minister of Environment and Energy and Mr. Konstantinos Fragogiannis, Deputy Minister for Economic Diplomacy and Openness 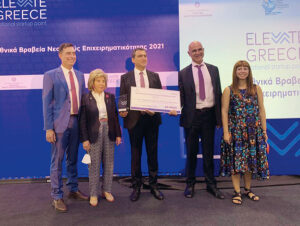 In the wake of its first ever Thessaloniki Future Thinking Dialogues (TFTD): A Hub of Talent Innovation and Technology in the Making event, which took place in Thessaloniki in June 2021, the American-Hellenic Chamber of Commerce organized a panel discussion titled “TFTD: Transforming Education and Reskilling as a Foundation of Growth” which was held on September 16, in the context of the Thessaloniki Helexpo Forum at this year’s Thessaloniki International Fair.

The speakers at the event were Dr. Georgios Iordanidis, Vice Rector for Finance, Management and Development at the University of Western Macedonia (UOWM); Dr. Efstratios Stylianidis, Vice Rector for Research and Lifelong Learning at the Aristotle University of Thessaloniki (AUTH); Athanasia Theodoridou, Deputy General Director of Vocational Education and Training at the Greek Manpower Employment Organization (OAED); and Dr. Loukas Zahilas, Head of the Department for VET Systems and Institutions (DSI) at Cedefop. Vassilis Kafatos, Vice President of the board of directors and Chair of the Northern Greece Committee at the American-Hellenic Chamber of Commerce – Deloitte Partner, moderated the event.

The discussion built on the core themes of the TFTD conference in June, particularly the importance of talent and adequately trained and skilled human resources as a crucial factor for the development of Thessaloniki into an international technology and innovation hub. In a rapidly changing world, education is being transformed, reskilling and upskilling is becoming a priority while talent is evolving into the rarest and most valuable asset for businesses and consequently for cities and countries. All speakers expressed their deep concern towards what seems to be a weakness in understanding future market needs as far as qualifications are concerned which is exacerbated by rapid changes in the job market. The speakers also acknowledged the importance of current support tools whilst recognizing significant opportunities that lie ahead.

The panel looked at education and lifelong professional training and upskilling as key elements of any national strategic plan for the development of the Greek economy and the importance of effective collaboration between academia, business and state in order to ensure the country’s competitive advantage moving forward. Dr. Stylianidis spoke on the importance of improving skill matching, noting that Greece currently ranks last among EU countries, underlined the importance of making the most of relationships between universities and businesses, and pointed to AUTH’s ongoing work to map and better understand the current job needs of local businesses. Theodoridou pointed to figures indicating that despite 17% unemployment, one in three businesses still report difficulties in finding appropriately skilled labor and underlined OAED’s efforts to provide reskilling through key partnerships with business organizations and universities, including joint efforts with the American-Hellenic Chamber of Commerce. Dr. Iordanidis further emphasized the crucial importance of efficient coordination between collaborating parties, noting that patience and persistence are warranted and particular care is required when undertaking reskilling and upskilling tasks, and describing UOWM’s efforts to retrain the local workforce. Pointing out that two thirds of children of school age today will be employed in jobs that do not yet exist, Dr. Zahilas stressed the need to reimagine educational and vocational training systems and to tackle continued training programs not as extensions of existing initial programs but as new, streamlined and flexible endeavors reflecting the rapidly evolving needs and demands of the ever-changing job market.

Thanking panel participants, AmChamGR Vice President Kafatos acknowledged the many challenges and opportunities ahead, noting that “Today, we all recognize the opportunity that Greece has to modernize its education system, to focus on training and to emerge as an international knowledge and talent hub.” 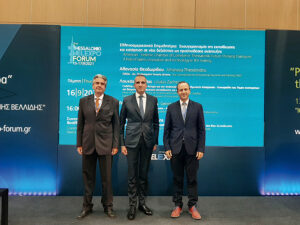