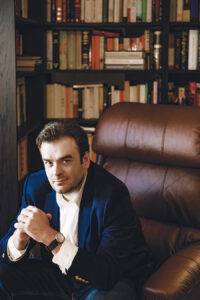 When the Ministry of Digital Governance was established a year ago, its name seemed to refer to the preparation of each country for the changes and challenges brought on by the Fourth Industrial Revolution in the digital transformation of the state. Yet if one were to take a closer look at the content and scope of our portfolio, they would find that, beyond the obvious, there was another goal, and that is to fulfill past priorities.

The mission of the Ministry of Digital Governance has been twofold from the very beginning, but our ultimate goal is just one: to empower citizens and businesses, as well as their relationship with the state. Especially in a country such as a Greece, where there was a substantial backlog of digital loose ends from the past, we had to move swiftly and precisely, implementing an extensive program of reforms and digital transformation, with our work focused on two key areas: streamlining procedures and establishing interoperability.

Our ultimate goal is just one: to empower citizens and businesses, as well as their relationship with the state

As evidenced by all the successful examples, everyone benefits from this policy. However, particularly when it comes to business, where conserving resources and time is a top priority, the benefits have already become apparent and will soon be manifold. Indicatively, our work during the first year includes the following measures that support businesses:

The above is just the beginning of what we want to accomplish. There will soon be more initiatives from the Ministry of Digital Governance as well as other projects in which the Ministry will participate, the pivotal of which are:

To conclude, the key ambition and goal of the Ministry of Digital Governance is to operate in such a way as to make interoperability between state services and records the rule rather than the exception; essentially, what we want is at the end of these four years for a system to be in place that exchanges not information rather than documents. This will contribute to accelerating all procedures, particularly those relating to business activities and the everyday life of citizens.

At the same time, we also want to act as a horizontal organization that not only facilitates the creation of businesses but also allows them to swiftly interact with the state and citizens at all stages of their operations. We have the will, the plan and the tools to achieve all the above. Businesses are a necessary and valuable ally in this endeavor, and we want to stand by them in a mutually beneficial collaboration.