A new storage and regasification terminal just off the shore of Alexandroupoli, in northern Greece, marks a crucial step for the development of Greece as a key transit hub for natural gas in the region. 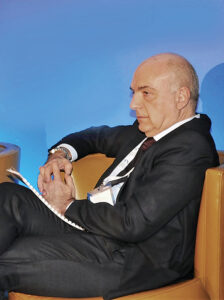 Alexandroupolis new liquefied natural gas (LNG) floating storage and regasification unit (FSRU) is set to bring multiple geostrategic and commercial benefits for our country, strengthening the energy independence of both Greece and the South Eastern Europe and improving competition in the regional market, thus paving the way for the reduction of supply costs across all markets in the region, including of course the Greek one.
The above perspectives will take shape from early 2023, when the terminal will start operating. As a result, “the most eastern European port of our country will be transformed into a global energy hub,” as noted on August 24, 2020, by Greek Prime Minister Kyriakos Mitsotakis, who together with the Prime Minister of Bulgaria, Boyko Borisov, were at the signing ceremony of the agreement for the participation in the project of the Bulgarian Bulgartransgaz.

The entry with 20% in the shareholding of Gastrade (infrastructure operator) of Bulgartransgaz, operator of the national natural gas system of Bulgaria, comes at a time when the preparation for the implementation of the terminal is in the final stage. In fact, the construction schedule is not affected by the shareholder structure of the company, as the preferred contractors are expected to be announced very soon, while the final investment decision is expected to be taken within 2020.

The project’s commercial viability has already been ensured, with a market test successfully completed in March. Through the process, Greek and international gas trading companies committed a 2.6 billion cubic meter regasification capacity for the first years of operation of the plant, which is equivalent to about 50% of its capacity.

The strong peripheral dimension of the terminal is due to the fact that it will be located at the crossroads of the South and the Vertical Corridor. In this context, it will operate in synergy with the other planned major energy projects of national and regional importance, such as the Greek-Bulgarian IGB pipeline, the TAP pipeline, and the Kavala underground gas storage facility.

The new terminal will offer access to the markets of SE Europe—including Bulgaria, Serbia, Romania, and North Macedonia—and, further north, of Hungary, up to Ukraine, reducing the dependence of Greece and other countries of the region on gas routes through Turkey. It will also create the conditions for reducing energy costs in all accessing countries, which in the case of Greece affects critical sectors of the economy, such as electricity generation, domestic consumption, and industry. The project will strengthen the competitiveness of Greek industry and increase exports, offering new jobs and supporting the development of the port of Alexandroupoli.

The amount of the investment reaches €380 million. Gastrade has already agreed with the country’s largest financial institution on all project financing. The European funding will come from the National Strategic Reference Framework (NSRF), since the project has been included in the List of Major Projects of the Operational Program “Competitiveness, Entrepreneurship and Innovation” (EPAnEK), with the resources being secured by the relevant public investment program.